The slow worm (Anguis fragilis) is a reptile native to western Eurasia. It is also called a deaf adder, a slowworm,[2][3] a blindworm, or regionally, a long-cripple. These legless lizards are also sometimes called common slowworms. The "blind" in blindworm refers to the lizard's small eyes, similar to a blindsnake (although the slowworm's eyes are functional).

Slow worms are semifossorial[4] (burrowing) lizards, spending much of their time hiding underneath objects. The skin of slow worms is smooth with scales that do not overlap one another. Like many other lizards, they autotomize, meaning that they have the ability to shed their tails to escape predators. While the tail regrows, it does not reach its original length. In the UK, they are common in gardens, and can be encouraged to enter and help remove pest insects by placing black plastic or a piece of tin on the ground. On warm days, one or more slow worms can often be found underneath these heat collectors. One of the biggest causes of mortality in slow worms in suburban areas is the domestic cat, against which it has no defense.

Slow worms have been shown to be a species complex, consisting of 5 distinct but similar species. 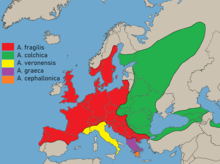 Anguis fragilis was traditionally divided into two subspecies (A. f. fragilis and A. f. colchica), but they are now classified as separate species:[5]

Three more species were later distinguished from A. fragilis:

Slow worms have an elongated body with a circular cross-section without limbs and reach a maximum length of up to 57.5 cm.[6] Most of the adult animals that can be observed are between 40 and 45 cm long, with up to 22 cm on the head and trunk section and the rest on the tail.[7] There is no visible neck. The tail, which ends in a horny tip, is continuous with the trunk and is often slightly longer. Slow worms exhibit caudal autotomy, the severing of the tail when it is pulled by predators. When regrown the tail only grows back to a short stub.

The skin surface consists of smooth, round to hexagonal scales that overlap like roof tiles and are roughly the same shape on the dorsal and ventral surfaces of the body. There are several longitudinal rows running along the underside. In total, the trunk has 125 to 150 transverse scale rows and the tail has another 130 to 160 rows. Under the scales there are bony plates (osteoderms), which means that slow worms crawl much more stiffly and clumsily than snakes. The scaling of the head is similar to that of other lizards. The ear openings are mostly completely hidden under the scales. The relatively small eyes have movable, closable eyelids (these are fused in snakes) and round pupils. The rather short tongue is broad, bilobed and does not end in fine tips. To lick, i.e. to absorb odorous substances, Slow worms have to open their mouths slightly, as they lack the gap in the upper lip that snakes possess. The pointed, sometimes quite loosely sitting teeth are curved backwards; There are 7 to 9 teeth in the premaxilla, 10 to 12 in the maxilla and 14 to 16 in the lower jaw.[8]

Close-up of the head of a slow worm

These reptiles are mostly active during the twilight and occasionally bask in the sun, but are more often found hiding beneath rocks and logs. They are carnivorous and, because they feed on slugs and worms, they can often be found in long grass and other damp environments.

In Central Europe, the mating season of the species is usually between the end of April and June. The males wrestle often violently around the females, although in most populations they are in the majority. The opponents try to push each other to the ground, bite each other and wrap themselves tightly around each other. When mating, the female is bitten in the head or neck region, while the male introduces his two hemipenes into the female's cloaca. Copulation can take several hours. Sometimes females mate with other males later. The gestation period of the females lasts 11 to 14 weeks; subsequently - between mid-July and the end of August, sometimes even later - they usually wean between eight and twelve young (extreme values: 2 to 28). Slow worms are ovoviviparous; At birth, the 7 to 10 cm long young animals are in a very thin, transparent egg shell, which they pierce immediately afterwards. They initially weigh less than a gram and still have a remnant of the yolk.[9] Juvenile slow worms have a contrasting color scheme and pattern. The top of the body is silvery-white to golden yellow, while the sides and underside are black.

Adult slow worms grow to be about 50 cm (20") long, and are known for their exceptionally long lives; the slow worm may be the longest-living lizard, living about 30 years in the wild and up to at least 54 years in captivity (this record is held by a male slow worm that lived at the Copenhagen Zoo from 1892 until 1946, the age when first obtained is unknown).[10][11] The female often has a stripe along the spine and dark sides, while the male may have blue spots dorsally. Juveniles of both sexes are gold with dark brown bellies and sides with a dark stripe along the spine.

In the United Kingdom, the slow worm has been granted protected status, alongside all other native British reptile species. The slow worm has been decreasing in numbers, and under the Wildlife and Countryside Act 1981, to intentionally kill, injure, sell, or advertise to sell them is illegal.[12][13]

The slow worm is not native to Ireland, but is believed to have been illegally introduced in the 1970s. It has been sighted only in parts of County Clare, mainly in the Burren region.[14][15][16]

Members of the genus Anguis, to which the slow worm belongs, first appeared during Europe during Mammal Paleogene zone 14, between 43.5 and 41.2 million years ago, corresponding to the Lutetian stage of the Eocene.[17] Remains assigned to the Anguis fragilis species complex are known from the late Miocene onwards.[18]