×
Offspring of a male donkey and a female horse
For other uses, see Mule (disambiguation). 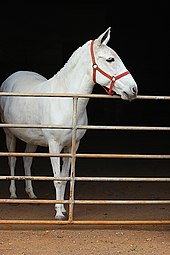 The size of a mule and work to which it is put depend largely on the breeding of the mule's mother (dam). Mules can be lightweight, medium weight, or when produced from draft mares, of moderately heavy weight.[3]: 85–87  Mules are reputed to be more patient, hardy, and long-lived than horses, and are described as less obstinate and more intelligent than donkeys.[4]: 5 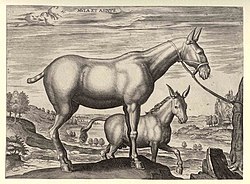 Mule and Ass by Hendrik Goltzius or Hieronymus Wierix, 1578

The mule is valued because, while it has the size and ground-covering ability of its dam, it is stronger than a horse of similar size and inherits the endurance and disposition of the donkey sire, tending to require less feed than a horse of similar size. Mules also tend to be more independent than most domesticated equines other than its parental species, the donkey. 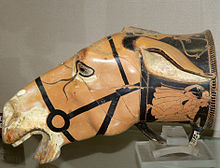 Ancient Greek rhyton in the shape of a mule's head, made by Brygos, early fifth century BC, Jérôme Carcopino Museum, Department of Archaeology, Aleria

The mule is an example of hybrid vigor.[11] Charles Darwin wrote: "The mule always appears to me a most surprising animal. That a hybrid should possess more reason, memory, obstinacy, social affection, powers of muscular endurance, and length of life, than either of its parents, seems to indicate that art has here outdone nature."[12]

The mule inherits from its sire the traits of intelligence, sure-footedness, toughness, endurance, disposition, and natural cautiousness. From its dam it inherits speed, conformation, and agility.[13]: 5–6, 8  Mules are reputed to exhibit a higher cognitive intelligence than their parent species, but robust scientific evidence to back up these claims is lacking. Preliminary data exist from at least two evidence-based studies, but they rely on a limited set of specialized cognitive tests and a small number of subjects.[14][15] Mules are generally taller at the shoulder than donkeys and have better endurance than horses, although a lower top speed.[16][14]

Handlers of working animals generally find mules preferable to horses; mules show more patience under the pressure of heavy weights, and their skin is harder and less sensitive than that of horses, rendering them more capable of resisting sun and rain.[10] Their hooves are harder than horses', and they show a natural resistance to disease and insects. Many North American farmers with clay soil found mules superior as plow animals.

A mule does not sound exactly like a donkey or a horse. Instead, a mule makes a sound similar to a donkey's, but also has the whinnying characteristics of a horse (often starts with a whinny, ends in a hee-haw). Mules sometimes whimper.[citation needed]

Mules exist in a variety of colors and sizes; these mules had a draft mare for a mother.

A mule battery in the Second Anglo-Afghan War (1879–1880): Sepoys are sitting by the larger field guns.

Mules occur in a variety of configurations, sizes, and colors; minis weigh under 200 lb (91 kg) to over 1,000 lb (454 kg). The coats of mules have the same varieties as those of horses. Common colors are sorrel, bay, black, and grey. Less common are white, roan, palomino, dun, and buckskin. Least common are paint or tobiano patterns. Mules from Appaloosa mares produce wildly colored mules, much like their Appaloosa horse relatives, but with even wilder skewed colors. The Appaloosa color is produced by a complex of genes known as the leopard complex. Mares homozygous for this gene complex bred to any color donkey will produce a spotted mule.

Mules historically were used by armies to transport supplies, occasionally as mobile firing platforms for smaller cannons, and to pull heavier field guns with wheels over mountainous trails such as in Afghanistan during the Second Anglo-Afghan War.[17]

The Food and Agriculture Organization of the United Nations reports that China was the top market for mules in 2003, closely followed by Mexico and many Central and South American nations.

Mules and hinnies have 63 chromosomes, a mixture of the horse's 64 and the donkey's 62. The different structure and number usually prevents the chromosomes from pairing up properly and creating successful embryos, rendering most mules infertile.

A few mare mules have produced offspring when mated with a purebred horse or donkey.[18][19] Herodotus gives an account of such an event as an ill omen of Xerxes' invasion of Greece in 480 BC: "There happened also a portent of another kind while he was still at Sardis—a mule brought forth young and gave birth to a mule" (Herodotus The Histories 7:57), and a mule's giving birth was a frequently recorded portent in antiquity, although scientific writers also doubted whether the thing was really possible (see e.g. Aristotle, Historia animalium, 6.24; Varro, De re rustica, 2.1.28).

A 1939 article in the Journal of Heredity describes two offspring of a fertile mare mule named "Old Bec", which was owned at the time by Texas A&M University in the late 1920s. One of the foals was a female, sired by a jack. Unlike her mother, she was sterile. The other, sired by a five-gaited Saddlebred stallion, exhibited no characteristics of any donkey. That horse, a stallion, was bred to several mares, which gave birth to live foals that showed no characteristics of the donkey.[23]

The mule is "the most common and oldest known manmade hybrid."[24][25] It was likely invented in ancient times in what is now Turkey. They were common in Egypt by 3000 BCE.[24] Homer noted their arrival in Asia Minor in the Iliad in 800 BCE. Mules are mentioned in the Bible (Samuel 2:18:9, Kings 1:18:5, Zacharia 14:15, Psalms 32:9). Christopher Columbus brought mules to the New World.[25] George Washington is known as the father of the American mule due to his success in producing 57 mules at his home at Mount Vernon. At the time, mules were not common in the United States, but Washington understood their value, as they were "more docile than donkeys and cheap to maintain."[26] In the 19th century, they were used in various capacities as draft animals - on farms, especially where clay made the soil slippery and sticky; pulling canal boats; and famously for pulling, often in teams of 20 animals, wagonloads of borax out of Death Valley, California from 1883 to 1889. The wagons were among the largest ever pulled by draft animals, designed to carry 10 short tons (9 metric tons) of borax ore at a time.[27] 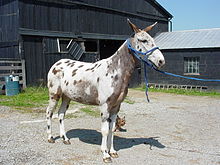 In the second half of the 20th century, widespread usage of mules declined in industrialized countries. The use of mules for farming and transportation of agricultural products largely gave way to steam-, then gasoline-powered, tractors and trucks.

Mules are still used extensively to transport cargo in rugged, roadless regions, such as the large wilderness areas of California's Sierra Nevada mountains or the Pasayten Wilderness of northern Washington. Commercial pack mules are used recreationally, such as to supply mountaineering base camps, and also to supply trail-building and maintenance crews, and backcountry footbridge-building crews.[28] As of July 2014, at least 16 commercial mule pack stations are in business in the Sierra Nevada.[29] The Angeles chapter of the Sierra Club has a mule pack section that organizes hiking trips with supplies carried by mules.[30]

During the Soviet–Afghan War, mules were used to carry weapons and supplies over Afghanistan's rugged terrain to the mujahideen.[31]

About 3.5 million donkeys and mules are slaughtered each year for meat worldwide.[32]

Mule trains have been part of working portions of transportation links as recently as 2005 by the World Food Programme.[33] 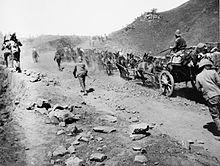 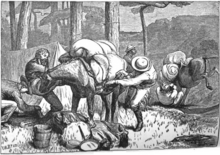 Loading mules during exploration of the American West, from Frances Fuller Victor's 1887 book Eleven Years in the Rocky Mountains and a Life on the Frontier

A "mule train" is a connected or unconnected line of pack mules, usually carrying cargo. Because of the mule's ability to carry at least as much as a horse, its trait of being sure-footed along with tolerance of poorer, coarser foods and abilities to tolerate arid terrains, mule trains were common caravan organized means of bulk transport back into preclassical times. In many climate and circumstantial instances, an equivalent string of pack horses would have to carry more fodder and sacks of high-energy grains such as oats, so could carry less cargo. In modern times, strings of sure-footed mules have been used to carry riders in dangerous but scenic backcountry terrain such as excursions into canyons.

Pack trains were instrumental in opening up the American West, as they could carry up to 250 lb (110 kg), survive on rough forage,[a] did not require feed, and could operate in the arid, higher elevations of the Rockies, serving as the main cargo means to the west from Missouri during the heyday of the North American fur trade. Their use antedated the move west into the Rockies as colonial Americans sent out the first fur trappers and explorers past the Appalachians, who were then followed west by high risk-taking settlers by the 1750s (such as Daniel Boone), who led an increasing flood of emigrants who began pushing west over into southern New York, and through the gaps of the Allegheny into the Ohio Country (the lands of western Province of Virginia and the Province of Pennsylvania), into Tennessee and Kentucky before and especially after the American Revolution.

Offspring of a male donkey and a female horse
For other uses, see Mule (disambiguation).