The family Talpidae[1] includes the moles, shrew moles, desmans, and other intermediate forms of small insectivorous mammals of the order Eulipotyphla. Talpids are all digging animals to various degrees: moles are completely subterranean animals; shrew moles and shrew-like moles somewhat less so; and desmans, while basically aquatic, excavate dry sleeping chambers; whilst the quite unique star-nosed mole is equally adept in the water and underground. Talpids are found across the Northern Hemisphere and southern Asia, Europe, and North America, although none are found in Ireland nor in the Americas south of northern Mexico.

The first talpids evolved from shrew-like animals which adapted to digging late in the Eocene in Europe. The most primitive living talpids are believed to be the shrew-like moles, with other species having adapted further into the subterranean, and, in some cases, aquatic lifestyles.[2]

Talpids are small, dark-furred animals with cylindrical bodies and hairless, tubular snouts. They range in size from the tiny shrew moles of North America, as small as 10 cm in length and weighing under 12 grams, to the Russian desman, with a body length of 18–22 cm, and a weight of about 550 grams. The fur varies between species, but is always dense and short; desmans have waterproof undercoats and oily guard hairs, while the subterranean moles have short, velvety fur lacking any guard hairs. The forelimbs of moles are highly adapted for digging, with powerful claws, and the paws turned permanently outwards to aid in shovelling dirt away from the front of the body. By contrast, desmans have webbed paws with a fringe of stiff fur to aid in swimming. Moles generally have short tails, but those of desmans are elongated and flattened.[3]

All species have small eyes and poor eyesight, but only a few are truly blind.[3] The external ears are very small or absent.[4] Talpids rely primarily on their sense of touch, having sensory vibrissae on their faces, legs, and tails. Their flexible snouts are particularly sensitive. Desmans are able to close both their nostrils and ears while diving. Unusually, the penis of talpids points backwards, and they have no scrotum.[3]

Females have six or eight teats. Both sexes have claws on all five fingers and on all five toes. The paw has an additional bone called the . In burrowing moles, the clavicle and the humeral head are connected. The tibia and the fibula are partially fused in all talpids. The pubis does not connect the two halves of the pelvic girdle. The skull is long, narrow, and rather flattened.[4] 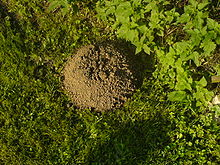 Desmans and shrew moles are primarily nocturnal, but moles are active day and night, usually travelling above ground only under cover of darkness. Most moles dig permanent burrows, and subsist largely on prey that falls into them. The shrew moles dig burrows to access deep sleeping chambers, but forage for food on the forest floor by night. Desmans dig burrows in riverbanks for shelter and forage in the water of rivers and lakes. The star-nosed mole is able to make a living much as other moles do, but are also very capable aquatic creatures, where they are able to smell underwater by using their unique proboscis to hold out a bubble of air into the water.

Talpids appear to be generally quite antisocial animals, and although at least one species, the star-nosed mole, will share burrows, talpids are known to engage in much territorial behavior, including extraordinarily fast battles.[3]

The family is divided into three subfamilies, 17 genera and 51 species.

The following mammals have burrowing habits, and have by virtue of convergent evolution many derived characters in common with true moles from the family Talpidae but are nonetheless unrelated.

All species in the family Talpidae are classed as "prohibited new organisms" under New Zealand's Hazardous Substances and New Organisms Act 1996, preventing them from being imported into the country.[9]