×
Reptile genus of herbivorous lizards
This article is about the genus. For the best known species, see Green iguana. For the family of related lizards, see Iguanidae.
For other uses, see Iguana (disambiguation). 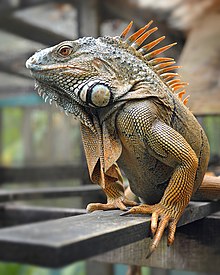 Iguana (/ɪˈɡwɑːnə/,[1][2] Spanish: [iˈɣwana]) is a genus of herbivorous lizards that are native to tropical areas of Mexico, Central America, South America, and the Caribbean. The genus was first described in 1768 by Austrian naturalist Josephus Nicolaus Laurenti in his book Specimen Medicum, Exhibens Synopsin Reptilium Emendatam cum Experimentis circa Venena. There are two species in the genus; the green iguana, which is widespread throughout its range and a popular pet, and the Lesser Antillean iguana, which is native to the Lesser Antilles; genetic analysis indicates that the green iguana may comprise a species complex of multiple species, some of which have been recently described, but the Reptile Database considers all of these as subspecies of the green iguana.[3][4]

The word "iguana" is derived from the original Taino name for the species, iwanana.[5] In addition to the two species in the genus Iguana, several other related genera in the same family have common names of the species including the word "iguana".[6][7]

Iguanas can range from 1.5 to 1.8 metres (5 to 6 ft) in length, including their tail. The two species of lizard within the genus Iguana possess a dewlap and a row of elongated scales running from the midline of their necks down to their tails. Iguanas have varying types of scales covering different areas of their body, for example, there are some large round tuberculate scales scattered around the lateral region of the neck among smaller, overlapping scales.[8] The scales on the dorsal trunk of their body are also thicker and more tightly packed than those on the ventral side.[8] These scales may be a variety of colors and are not always visible from close distances. They have a large round scale on their cheeks known as a subtympanic shield.[9]

Iguanas have keen vision and can see shapes, shadows, colors, and movement at long distances. Their visual acuity enables them to navigate through crowded forests and to locate food. They employ visual signals to communicate with other members of the same species.[9]

The tympanum, the iguana's eardrum, is located above the subtympanic shield (or "ear shield") behind each eye. Iguanas are often hard to spot, as they tend to blend into their surroundings and their coloration enables them to hide from larger predators.[9]

Several species of lizard, including the iguana, have a pale scale towards the back of their head marking the parietal eye. This organ is sensitive to changes in illumination and sends signals to the pineal gland signaling the change between day and night. A photopigment commonly found in the lamprey, known as parapinopsin, is also found in the iguana and is photosensitive to UV light and aids in the signaling between day and night.[11] 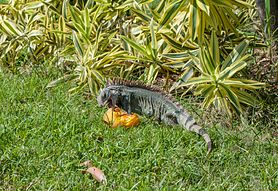 Iguanas have an exclusively herbivorous diet,[12] as illustrated above by a green iguana eating a mango in Venezuela

Iguanas have developed an herbivorous lifestyle, foraging exclusively on vegetation and foliage.[12] In order to acquire, process and digest plant matter, herbivorous lizards must have a higher bite force relative to their size in comparison to carnivorous or omnivorous reptiles. The skull of the iguana has undergone modifications resulting in a strong bite force and efficient processing of vegetation, according to one study.[13]

In order to accomplish this biomechanically, herbivorous lizards (such as the iguana) have taller and wider skulls, shorter snouts, and larger bodies relative to carnivorous and omnivorous reptiles.[13] Increasing the robusticity of the skull allows for increased muscle presence and increases the ability of the skull to withstand stronger forces.[14] 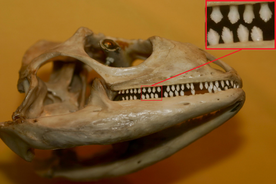 Green iguana skull and teeth. The teeth of the green iguana sit on the surface of the jawbone, known as acrodontal placement.[15]

Furthermore, the teeth of the iguana are acrodontal, meaning that their teeth sit on top of the surface of the jaw bone[15] and project upwards. The teeth themselves are small and serrated - designed to grasp and shear food.[16]

Male iguanas, like other male examples of Squamata, have two hemipenes. During copulation one hemipene will be inserted into the female's cloacal vent.[17] A female can store sperm from previous mates for several years to continue to fertilize her eggs in case she finds no male within her territory when she is ready to lay again.[18][19][20]

Iguanas tend to follow a promiscuous or polygynadrous mating style during the dry season. Mating during the dry season ensures that their offspring will hatch during the wet or rainy season when food will be more plentiful. Females control large territories where they make several nests. Males compete amongst each other for the females in an area and mark their won territory with a pheromone secreted from the femoral pores on the dorsal side of their hind limbs. Male behavior during sexual competition involves head bobbing, extending and retracting their dewlap, nuzzling and biting the necks of females, and on occasion, changing color. Once a female chooses a male, he will straddle the female and hold her in place by biting onto her shoulder, which sometimes leaves scars on females. After copulation, eggs are laid within several nests and allowed to incubate. This low level of parental intervention with their offspring makes iguanas an example of r-strategy reproduction.[citation needed]

A phylogeny based on nuclear protein-coding genes, reviewed by Vidal and Hedges (2009) suggested that the subclade Iguania is in a group with snakes and anguimorphs (lizards). These groups share an oral gland capable of secreting toxins (a derived trait).[21] On the other hand, the phylogeny based on whole mitochondrial genomes, proposed by Rest et al. (2003), places the green iguana as the closest relative of the mole skink (Plestiodon egregius).[22] Lepidosaurs are reptiles with overlapping scales, and within this group both iguanians and tuataras (Sphenodons) project their tongue to seize prey items instead of using their jaw, which is called tongue prehension. However, iguanians are the only lineage within Squamata that displays this trait, meaning that it was gained independently in both iguanians and tuataras.[21] Iguanians are also the only squamates that primarily use their sight to identify and track prey rather than chemoreception or scent, and employ an ambush technique of catching prey instead of active searching.[21]

A study by Breuil et al. (2020) found the taxonomy of the genus Iguana as follows, with I. delicatissima being the most basal member of the group.[3] The species are classified as subspecies based on the ReptileDatabase definitions.

The Reptile Database synonymizes rhinolopha with I. iguana, only considering it a distinctive population, and recognizes I. insularis and I. melanoderma as subspecies of I. iguana. Four subspecies of green iguana are recognized under this treatment: I. i. insularis (Saint Vincent & the Grenadines and Grenada), I. i. sanctaluciae (Saint Lucia), I. i. melanoderma (parts of the northern Lesser Antilles, and potentially coastal Venezuela, the Virgin Islands, and Puerto Rico), and I. i. iguana (mainland South America). 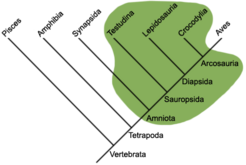 Simple phylogeny with Reptilia highlighted in green. Iguanians are within Lepidosauria.

Two extant species in the genus Iguana are widely recognized.

Three Caribbean subspecies of the green iguana are also recognized:

The Central American iguana (I. rhinolopha or I. iguana rhinolopha), sometimes considered a distinct species, is largely considered synonymous with I. iguana as the presence of horns does not necessarily indicate a new species or subspecies. The two described subspecies of (the Saint Lucia horned iguana (I. i. sanctaluciae) and the Grenadines horned iguana (I. i. insularis)) were originally described as subspecies of I. iguana, although they are genetically very similar and may not be separate subspecies from one another.[24] However, recent studies have recovered I. rhinolopha and I. insularis as distinct species based on genetics, but the Reptile Database disagrees with these conclusions, and classifies rhinolopha as synonymous with iguana, and insularis as a subspecies of iguana.[25] The Curaçao population of green iguana shows major genetic divergence and may also represent an as-of-yet undescribed species or subspecies.[3][26]

Iguanas have historically featured in the culinary traditions of Mexico and Central America. Iguana meat is also consumed in parts of the United States and Puerto Rico.[27] Also, the eggs of iguana are consumed in some parts of Latin America, such as Nicaragua and Colombia.[28] 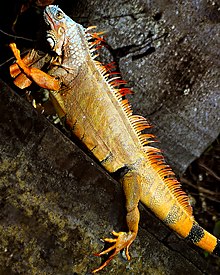 Reptile genus of herbivorous lizards
This article is about the genus. For the best known species, see Green iguana. For the family of related lizards, see Iguanidae.
For other uses, see Iguana (disambiguation).
Main article: Iguana meat