×
This article is about all true hornets. For other uses, see Hornet (disambiguation).
Genus of eusocial wasp

Hornets (insects in the genus Vespa) are the largest of the eusocial wasps, and are similar in appearance to their close relatives yellowjackets. Some species can reach up to 5.5 cm (2.2 in) in length. They are distinguished from other vespine wasps by the relatively large top margin of the head and by the rounded segment of the abdomen just behind the waist. Worldwide, 22 species of Vespa are recognized.[2][3] Most species only occur in the tropics of Asia, though the European hornet (V. crabro), is widely distributed throughout Europe, Russia, North America, and Northeast Asia. Wasps native to North America in the genus Dolichovespula are commonly referred to as hornets (e.g., baldfaced hornets), but are actually yellowjackets.

Like other social wasps, hornets build communal nests by chewing wood to make a papery pulp. Each nest has one queen, which lays eggs and is attended by workers that, while genetically female, cannot lay fertile eggs. Most species make exposed nests in trees and shrubs, but some (such as Vespa orientalis) build their nests underground or in other cavities. In the tropics, these nests may last year-round, but in temperate areas, the nest dies over the winter, with lone queens hibernating in leaf litter or other insulative material until the spring. Male hornets are docile and do not have stingers.

Hornets are often considered pests, as they aggressively guard their nesting sites when threatened and their stings can be more dangerous than those of bees.[4] 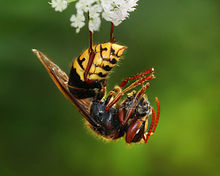 European hornet with the remnants of a honey bee.
Main article: Characteristics of common wasps and bees

While taxonomically well defined, some confusion may remain about the differences between hornets and other wasps of the family Vespidae, specifically the yellowjackets, which are members of the same subfamily. Also, a related genus of Asian nocturnal vespines, Provespa, is referred to as "night wasps" or "night hornets",[5] though they are not true hornets.[6]

Some other large wasps are sometimes referred to as hornets, most notably the bald-faced hornet (Dolichovespula maculata) found in North America. It is set apart by its black and ivory coloration. The name "hornet" is used for this species primarily because of its habit of making aerial nests (similar to some of the true hornets) rather than subterranean nests. Another example is the Australian hornet (Abispa ephippium), which is actually a species of potter wasp.

Hornets are found mainly in the Northern Hemisphere. The common European hornet (V. crabro) is the best-known species, widely distributed in Europe (but is never found north of the 63rd parallel), Ukraine, and European Russia (except in extreme northern areas). In the east, the species' distribution area stretches over the Ural Mountains to western Siberia (found in the vicinity of Khanty-Mansiysk). In Asia, the common European hornet is found in southern Siberia, as well as in eastern China. The common European hornet was accidentally introduced to eastern North America about the middle of the 19th century and has lived there since at about the same latitudes as in Europe. However, it has never been found in western North America.

The Asian giant hornet (V. mandarinia) lives in the Primorsky Krai, Khabarovsky Krai (southern part), and Jewish AO regions of Russia, China, Korea, Taiwan, Cambodia, Laos, Vietnam, Indochina, India, Nepal, Sri Lanka, and Thailand, but is most commonly found in the mountains of Japan, where they are commonly known as the giant sparrow bee.

The Asian hornet (V. velutina) has been introduced to France, Spain, Portugal. and Italy.

Hornets have stings used to kill prey and defend nests. Hornet stings are more painful to humans than typical wasp stings because hornet venom contains a large amount (5%) of acetylcholine.[8][9] Individual hornets can sting repeatedly; unlike honey bees, hornets do not die after stinging because their stingers are very finely barbed (only visible under high magnification) and can easily be withdrawn, so are not pulled out of their bodies when disengaging.

The toxicity of hornet stings varies according to hornet species; some deliver just a typical insect sting, while others are among the most venomous known insects.[10] Single hornet stings are not in themselves fatal, except sometimes to allergic victims.[10] Multiple stings by non-European hornets may be fatal because of highly toxic species-specific components of their venom.[11]

The stings of the Asian giant hornet (V. mandarinia) are among the most venomous known,[10] and are thought to cause 30–50 human deaths annually in Japan. Between July and September 2013, hornet stings caused the death of 42 people in China.[12] Asian giant hornet's venom can cause allergic reactions and multiple organ failure leading to death, though dialysis can be used to remove the toxins from the bloodstream.[12]

People who are allergic to wasp venom are also allergic to hornet stings. Allergic reactions are commonly treated with epinephrine (adrenaline) injection using a device such as an epinephrine autoinjector, with prompt follow-up treatment in a hospital. In severe cases, allergic individuals may go into anaphylactic shock and die unless treated promptly.[13]

Hornets, like many social wasps, can mobilize the entire nest to sting in defense, which is highly dangerous to humans and other animals. The attack pheromone is released in case of threat to the nest. In the case of the Asian giant hornet (V. mandarinia), this is also used to mobilize many workers at once when attacking colonies of their prey, honey bees and other Vespa species.[14] Three biologically active chemicals, 2-pentanol, 3-methyl-1-butanol, and 1-methylbutyl 3-methylbutanoate, have been identified for this species. In field tests, 2-pentanol alone triggered mild alarm and defensive behavior, but adding the other two compounds increased aggressiveness in a synergistic effect.[14] In the European hornet (Vespa crabro) the major compound of the alarm pheromone is 2-methyl-3-butene-2-ol.[15]

If a hornet is killed near a nest, it may release pheromones that can cause the other hornets to attack. Materials that come into contact with these pheromones, such as clothes, skin, and dead prey or hornets, can also trigger an attack, as can certain food flavorings, such as banana and apple flavorings, and fragrances that contain C5 alcohols and C10 esters.[14] 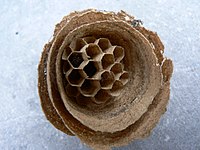 The structure of an incipient nest

In V. crabro, the nest is founded in spring by a fertilized female known as the queen. She generally selects sheltered places such as dark, hollow tree trunks. She first builds a series of cells (up to 50) out of chewed tree bark. The cells are arranged in horizontal layers named combs, each cell being vertical and closed at the top. An egg is then laid in each cell. After 5–8 days, the egg hatches. Over the following two weeks, the larva progresses through five stages of development. During this time, the queen feeds it a protein-rich diet of insects. Then, the larva spins a silk cap over the cell's opening, and during the next two weeks, transforms into an adult, a process called metamorphosis. The adult then eats its way through the silk cap. This first generation of workers, invariably females, now gradually undertakes all the tasks formerly carried out by the queen (foraging, nest building, taking care of the brood, etc.) with the exception of egg-laying, which remains exclusive to the queen. 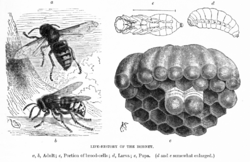 As the colony size grows, new combs are added, and an envelope is built around the cell layers until the nest is entirely covered, with the exception of an entry hole. To be able to build cells in total darkness, they apparently use gravity to aid them. At the peak of its population, which occurs in late summer, the colony can reach a size of 700 workers.

At this time, the queen starts producing the first reproductive individuals. Fertilized eggs develop into females (called "gynes" by entomologists), and unfertilized ones develop into males (sometimes called "drones"). Adult males do not participate in nest maintenance, foraging, or caretaking of the larvae. In early to mid-autumn, they leave the nest and mate during "nuptial flights".

Other temperate species (e.g., the yellow hornet, V. simillima, or the Oriental hornet, V. orientalis) have similar cycles. In the case of tropical species (e.g., V. tropica), life histories may well differ, and in species with both tropical and temperate distributions (such as the Asian giant hornet, V. mandarinia), the cycle likely depends on latitude.

Adult hornets and their relatives (e.g., yellowjackets) feed themselves with nectar and sugar-rich plant foods. Thus, they can often be found feeding on the sap of oak trees, rotting sweet fruits, honey, and any sugar-containing foodstuffs. Hornets frequently fly into orchards to feed on overripe fruit. Hornets tend to gnaw a hole in fruit to become totally immersed in its pulp. A person who accidentally picks fruit with a feeding hornet can be attacked by the disturbed insect.

The adults also attack various insects, which they kill with stings and jaws. Due to their size and the power of their venom, hornets are able to kill large insects such as honey bees, grasshoppers, locusts, and katydids without difficulty. The victim is fully masticated and then fed to the larvae developing in the nest, rather than consumed by the adult hornets. Given that some of their prey are considered pests, hornets may be considered beneficial under some circumstances.

The larvae of hornets produce a sweet secretion containing sugars and amino acids that is consumed by the workers and queens.[16]

While a history of recognizing subspecies exists within many of the hornets, the most recent taxonomic revision of the genus treats all subspecific names in the genus Vespa as synonyms, effectively relegating them to no more than informal names for regional color forms.[3]

Hornet larvae are widely accepted as food in mountainous regions in China. Hornets and their nests are treated as medicine in traditional Chinese medicine.[citation needed]

This article is about all true hornets. For other uses, see Hornet (disambiguation).
Genus of eusocial wasp
Main article: Characteristics of common wasps and bees