×
For other uses, see Guineafowl (disambiguation).
Family of birds

Guineafowl (/ˈɡɪnifaʊl/; sometimes called "pet speckled hens" or "original fowl") are birds of the family Numididae in the order Galliformes. They are endemic to Africa and rank among the oldest of the gallinaceous birds. Phylogenetically, they branched off from the core Galliformes after the Cracidae (chachalacas, guans, and curassows) and before the Odontophoridae (New World quail). An Eocene fossil lineage Telecrex has been associated with guineafowl; Telecrex inhabited Mongolia, and may have given rise to the oldest of the true phasianids, such as blood pheasants and eared pheasants, which evolved into high-altitude, montane-adapted species with the rise of the Tibetan Plateau. While modern guineafowl species are endemic to Africa, the helmeted guineafowl has been introduced as a domesticated bird widely elsewhere.[1]

Feather of a guineafowl 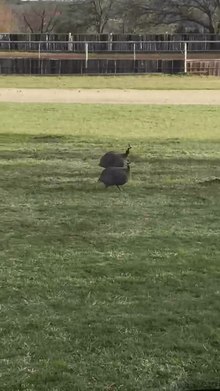 Play media
A flock of guineafowl free-roaming on a ranch in Texas (U.S.)

This is a list of guineafowl species, presented in taxonomic order.

Living Galliformes based on the work by John Boyd:[2]

The insect- and seed-eating, ground-nesting birds of this family resemble partridges, but with featherless heads, though both members of the genus Guttera have a distinctive black crest, and the vulturine guineafowl has a downy brown patch on the nape. Most species of guineafowl have a dark grey or blackish plumage[3] with dense white spots, but both members of the genus Agelastes lack the spots. While several species are relatively well known, the plumed guineafowl and the two members of the genus Agelastes remain relatively poorly known. These large birds measure 40–71 cm (15+1⁄2–28 in) in length, and weigh 700–1,600 g (1 lb 9 oz–3 lb 8 oz). Guinea hens weigh more than guinea cocks, possibly because of the larger reproductive organs in the female compared to the male guinea fowl. Also, the presence of relatively larger egg clusters in the dual-purpose guinea hens may be a factor that contributes to the higher body weight of the guinea hens.[4]

The species for which information is known are normally monogamous, mating for life, or are serially monogamous; however, occasional exceptions have been recorded for helmeted and Kenya crested guineafowl, which have been reported to be polygamous in captivity.[5] All guineafowl are social, and typically live in small groups or large flocks. Though they are monogamous, species of the least-derived genera Guttera, Agelastes, and Acryllium tend toward social polyandry, a trait shared with other primitive galliforms such as roul roul, and Congo peafowl.

Guineafowl travel behind herd animals and beneath monkey troups, where they forage within manure and on items that have fallen to the understory from the canopy. They play a pivotal role in the control of ticks, flies, locusts, scorpions, and other invertebrates. They pluck maggots from carcasses and manure.

Wild guineafowl are strong flyers. Their breast muscles are dark (aerobic metabolism), enabling them to sustain themselves in flight for considerable distances if hard-pressed. Grass and bush fires are a constant threat to them and flight is the most effective escape.

Some species of guineafowl, like the vulturine, may go without drinking water for extended periods, instead sourcing their moisture from their food. Young guineafowl (called keets) are very sensitive to weather, in particular cold temperatures.

Guinea hens are not known to be good mothers,[6] but in the wild, the guinea hen's mate (a guinea cock) may help tend the young keets during the day by keeping them warm and finding food. Sometimes, more than one cock helps raise the young. Guineafowl (hens and cocks together) make good parents. During warm weather, the cock is unlikely to set on the keets during the night (leaving that duty to the hen), but may help the hen keep them warm at night when temperatures drop below freezing.

Guineafowl may be trained to go into a coop (instead of roosting in trees) when very young. Once hatched and ready to leave the brooder (around 3 weeks), they may be enclosed in a coop for at least 3 days so they learn where "home" is. When guinea parents (that already roost in a coop) raise their own keets, the hen sets on them outdoors at night, but then the parents teach the keets to also go into the coop in the evenings around 3 weeks of age.

Each sex has a different call, which can be used to differentiate between female and male.[7] Unlike chickens (which generally do best with one rooster for a flock of hens[8]), guinea fowl do well with one cock for each hen.

Guineafowl's have been shown to act as a deterrent to foxes. [9] Due to the spread of Lyme disease from ticks, Guineafowl are often kept because they will eat the ticks. [10]

Guineafowl species are found across sub-Saharan Africa, some almost in the entire range, others more localized, such as the plumed guineafowl in west-central Africa and the vulturine guineafowl in north-east Africa. They live in semiopen habitats such as savanna or semideserts, while some, such as the black guineafowl, mainly inhabit forests. Some perch high on treetops.

The helmeted guinea fowl has been introduced in East Africa, South America, the West Indies, the United States, Britain, and India, where it is raised as food or pets.[1]

Guineafowl meat is drier and leaner than chicken meat and has a gamey flavour. It has marginally more protein than chicken or turkey, roughly half the fat of chicken and slightly fewer Calories per gram.[11] Their eggs are substantially richer than those of chickens.[12]

For other uses, see Guineafowl (disambiguation).
Family of birds