×
Common name for a group of waterfowl
For other uses, see Goose (disambiguation). 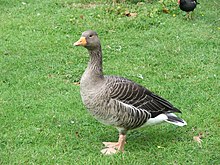 A goose (plural geese) is a bird of any of several waterfowl species in the family Anatidae. This group comprises the genera Anser (the grey geese and white geese) and Branta (the black geese). Some other birds, mostly related to the shelducks, have "goose" as part of their names. More distantly related members of the family Anatidae are swans, most of which are larger than true geese, and ducks, which are smaller.

The term "goose" may refer to either a male or female bird, but when paired with "gander", refers specifically to a female one (the latter referring to a male). Young birds before fledging are called goslings.[1] The collective noun for a group of geese on the ground is a gaggle; when in flight, they are called a skein, a team, or a wedge; when flying close together, they are called a plump.[2]

Two genera of geese are only tentatively placed in the Anserinae; they may belong to the shelducks or form a subfamily on their own: Cereopsis, the Cape Barren goose, and Cnemiornis, the prehistoric New Zealand goose. Either these or, more probably, the goose-like coscoroba swan is the closest living relative of the true geese.

Fossils of true geese are hard to assign to genus; all that can be said is that their fossil record, particularly in North America, is dense and comprehensively documents many different species of true geese that have been around since about 10 million years ago in the Miocene. The aptly named Anser atavus (meaning "progenitor goose") from some 12 million years ago had even more plesiomorphies in common with swans. In addition, some goose-like birds are known from subfossil remains found on the Hawaiian Islands.

Geese are monogamous, living in permanent pairs throughout the year; however, unlike most other permanently monogamous animals, they are territorial only during the short nesting season. Paired geese are more dominant and feed more, two factors that result in more young.[4][5]

Geese honk while in flight to encourage other members of the flock to maintain a 'v-formation' and to help communicate with one another.[6]

Geese fossils have been found ranging from 10 to 12 million years ago. Fossils found in the Gagarno region of central Italy suggest the existence of a pre-historic relative of the goose, that stood one and a half metres tall. The evidence suggests the bird was flightless unlike modern geese.[7]

Some mainly Southern Hemisphere birds are called "geese", most of which belong to the shelduck subfamily Tadorninae. These are:

The oldest collection of Medieval Icelandic laws is known as "Grágás"; i.e., the Gray Goose Laws.

Various etymologies were offered for that name:

Three flying geese in the coat of arms of Polvijärvi