Garter snake is a common name for generally harmless, small to medium-sized snakes belonging to the genus Thamnophis. Endemic to North and Central America, species in the genus Thamnophis can be found from the subarctic plains of Canada to Costa Rica.

Garter snakes vary in length from 46 to 137 cm (18 to 54 in) and weigh approximately 140 g (5 oz).[2] With no real consensus on the classification of species of Thamnophis, disagreement between taxonomists and sources such as field guides over whether two types of snakes are separate species or subspecies of the same species is common. Garter snakes are closely related to the genus Nerodia (water snakes), with some species having been moved back and forth between genera.

The first garter snake to be identified was the eastern garter snake (now Thamnophis sirtalis sirtalis), by zoologist and taxonomist Carl Linnaeus in 1758. The genus Thamnophis was described by Leopold Fitzinger in 1843 as the genus for the garter snakes and ribbon snakes.[3] Many snakes previously identified as their own genera or species have been reclassified as species or subspecies in Thamnophis. There are currently 35 species in the genus, with several subspecies in some of them.[4]

Garter snakes are present throughout most of North America. Their wide distribution is due to their varied diets and adaptability to different habitats, with varying proximity to water; however in the western part of North America these snakes are more aquatic than in the eastern portion. Garter snakes live in a variety of habitats, including forests, woodlands, fields, grasslands and lawns, but never far from water, often an adjacent wetland, stream or pond. This reflects the fact that amphibians are a large part of their diet. Garter snakes are often found near small ponds with tall weeds. 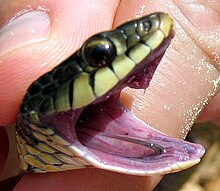 The posterior tooth of a garter snake

Garter snakes have complex systems of pheromonal communication. They can find other snakes by following their pheromone-scented trails. Male and female skin pheromones are so different as to be immediately distinguishable. However, male garter snakes sometimes produce both male and female pheromones. During the mating season, this ability fools other males into attempting to mate with them. This causes the transfer of heat to them in kleptothermy, which is an advantage immediately after hibernation, allowing them to become more active.[5] Male snakes giving off both male and female pheromones have been shown to garner more copulations than normal males in the mating balls that form at the den when females enter the mating melee.

Garter snakes use the vomeronasal organ to communicate via pheromones through the tongue flicking behavior which gathers chemical cues in the environment. Upon entering the lumen of the organ, the chemical molecules will come into contact with the sensory cells which are attached to the neurosensory epithelium of the vomeronasal organ.[citation needed]

If disturbed a garter snake may coil and strike but typically it will hide its head and flail its tail. These snakes will also discharge a malodorous, musky-scented secretion from a gland near the cloaca. They often use these techniques to escape when ensnared by a predator. They will also slither into the water to escape a predator on land. Hawks, crows, egrets, herons, cranes, raccoons, otters and other snake species (such as coral snakes and kingsnakes) will eat garter snakes, with even shrews and frogs eating the juveniles. 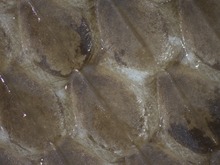 Close up of the scales on the back of the common garter snake.

Being heterothermic, like all reptiles, garter snakes bask in the sun to regulate their body temperature. During brumation (the reptile equivalent of hibernation) garter snakes typically occupy large communal sites called hibernacula. These snakes will migrate large distances to brumate.

Garter snakes, like all snakes, are carnivorous. Their diet consists of almost any creature they are capable of overpowering: slugs, earthworms (nightcrawlers, as red wigglers are toxic to garter snakes), leeches, lizards, amphibians (including frog eggs), minnows, and rodents. When living near water they will eat other aquatic animals. The ribbon snake (Thamnophis sauritus) in particular favors frogs (including tadpoles), readily eating them despite their strong chemical defenses. Food is swallowed whole. Garter snakes often adapt to eating whatever they can find and whenever they can find it because food can be either scarce or abundant. Although they feed mostly on live animals they will sometimes eat eggs.[6]

Garter snakes were long thought to be non-venomous but discoveries in the early 2000s revealed that they in fact produce a neurotoxic venom.[7] Despite this, garter snakes cannot seriously injure or kill humans with the small amounts of comparatively mild venom they produce and they also lack an effective means of delivering it. In a few cases some swelling and bruising have been reported.[8] They do have enlarged teeth in the back of their mouth[9] but their gums are significantly larger and the secretions of their Duvernoy's gland are only mildly toxic.[8][10]

Evidence suggests that garter snake and newt populations share an evolutionary link in their levels of tetrodotoxin resistance, implying co-evolution between predator and prey.[11] Garter snakes feeding on toxic newts can also retain those toxins in their liver for weeks, making those snakes poisonous as well as venomous.[12] 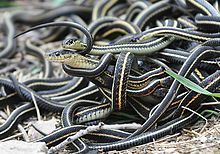 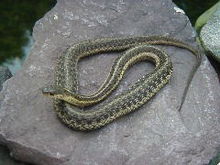 Despite the decline in their population from collection as pets (especially in the more northerly regions, in which large groups are collected at hibernation),[13] pollution of aquatic areas, and the introduction of American bullfrogs as potential predators, garter snakes are still some of the most commonly found reptiles in much of their ranges. The San Francisco garter snake (Thamnophis sirtalis tetrataenia), however, has been on the endangered list since 1969. Predation by crayfish has also been responsible for the decline of the narrow-headed garter snake (Thamnophis rufipunctatus).[14] 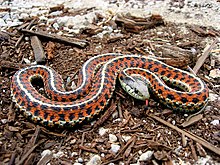 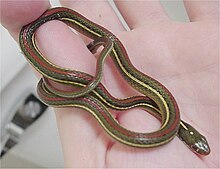